Long ago, when the earth was young…

There grew a wild turnip patch. One imbued with magical properties. Because of a potion that was spilled. And whose liquid remnants washed away with the rain. Running deep into the nearby soil.

No different in look. Or color. Or weight.

There was something different about them of course. But no one would ever know what. Until the fateful day came. When they were eaten at last.

And that day came soon. When a young little bunny came scurrying through the fields. And cast his eye upon those delicious looking turnips.

He was knocked back 20 feet. A wave of creativity burst through his veins.

His mind was suddenly filled with an overwhelming desire to create. And he fell writhing on the ground in agony.

He eventually fainted. And was carried back home by a friend who was passing by.

Awakening upon his bed later that evening, he called for canvas and paint to be brought to him. For that was all he could think of when he awoke.

… and paw to canvas…

… he soon created what was…

… the most magnificent art that he or his family had ever seen!

Word soon got out about his astounding new artistic abilities.

Animals from far and near came to see the bunny. Hungrily desiring to buy any and all art that he created. In exchange for all their food and money.

From where was this genius artistry flowing from?

Over time he started to understand…

It must have been the power of the turnip patch…

And so, taking the wealth he had quickly gained, he bought up all the land in those parts. And preserved the magical turnip patch for his personal use. Sharing the carefully guarded secret only between members of the Noble Bunny family.

Aurelia is the 17th generation of the Noble Bunny family. Whose magically artistic abilities have brought fame and fortune to all who have possessed their art.

She has eaten the turnips.

But unlike her predecessors, she has decided to make the magical art flowing from her paws available for all to use…

If they are willing to pay the price… 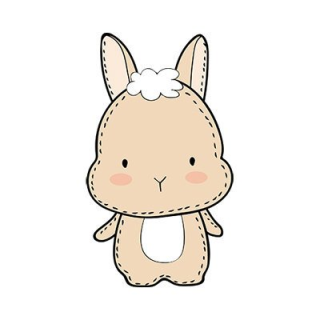